I enrolled my eldest in a transition to school program a few weeks ago and got a letter in the mail about the program’s start date today. It was addressed to my partner. Then to me. My partner has never set foot in that school, hasn’t called to coordinate anything with the school. Hadn’t heard about the program until I told him about it. Probably won’t go to any of the school days with our child. But you know, it’s not a big deal. It’s just a little thing. (The municipality and miscellaneous government offices do the same? It’s just easier to be consistent with these things. No misogyny here.)

I go to our local agricultural store to buy a waterer for the laying hens. The guy working there tells me that if my husband is handy I can get this here product and just punch holes in a tote, way cheaper. He meant well, not a big deal. (Huh, I wonder if hearing comments like these for thirty years contributed to my feeling less handy than All Of The Men? We’ll never know. Let’s just chalk it up to biology.)

We get a care package in the mail addressed to : ‘ family « partner’s name » ‘. So nineteen fifties vintage erasure. No problem. An honest mistake.

We move a herd of cattle across the road. I stop the traffic coming in one direction and my partner puts up the fencing and beckons the bulls and heifers across. The woman in the car that I stop asks if it’s my parents cattle. « No. » Smile. « Then what’s your husbands name? » Not a big deal. It was another generation. Women were farm wives never farmers.

A neighbour comes to our place to ask for a donation for a health cause. I give twenty bucks and start saying my full name for the tax receipt but am told « your husband gave last year, I’ll just leave it under his name. » (I get treated like a very uptight person when I insist on having my donations filed under my own name.)

I don’t even want to get into my encounters at the local hardware store.

Every day there’s a thing. There’s just a little thing. A ‘lighten up, not that big a deal’ thing. The sort of encounter that you could shrug off if it was a one-off, if that sort of misogyny and sexism didn’t happen almost every single day. When I’m in a good mood. When I’m excited to be doing this thing by myself. When I’m feeling competent or proud even. When I’m out and about with my boy children. When I’m starting to feel at peace and at home here. To be put back in my place, and by well meaning people, for the most part. The hot rage. And the fucking loneliness that follows.

(The city’s the same or almost, don’t get me wrong. I just had well honed coping mechanisms and pretty robust support networks there.)

I saw this image yesterday. (posted by feminists united)

I needed the reminder that, while feeling like a nag sucks, it’s the best of my options here.

Given all of this, seeing interviews and comments written by people who support the ban on the burkini makes me want to rage-vomit. You want to talk about women’s oppression? Check yourself, Westerners. Et la France avec son Académie Française et son amour du « masculin à valeur générique. » J’en ai plein mon casque.

Olga is my favourite barn cat. She’s been here since we moved to this place and hangs out on our stoop and window sills. She has a great badass attitude. She holds her own with all of the animals she meets here, she was saved from drowning in the unused sludge-filled manure pit and she bounces back from weird fur ailments every spring.

Cat reproduction has been a problem. The growth of their population is exponential in the spring and summer. As a result, a lot of the kittens die and while I feed the cats kibble daily, there isn’t enough (could never be enough?) for all of them. At this point, the problem isn’t as big as it’s been. But the ebb and flow of it is sad. It feels miserable and cruel.

Today, my mother gave me an early christmas present and brought Olga to the veterinarian to be spayed. She is the most domesticated of the feral cats but she was hella hard to catch. At the vet, we learned that she had three kittens growing in her uterus–while she is still nursing her two kittens born a month or two ago. This is why. Why she’s so small. The constant onslaught of babies to grow and feed, in utero and out.

She returns at the end of the day, the surgery having gone well, with a cone around her neck to keep her from licking her stitches. « She should rest and just have short drinks of water. She shouldn’t eat until tomorrow. She’s supposed to be kept from running, » we are told. As we slip the cat carrier into a bigger cage in the closest outbuilding, she meows miserably. This poor poor creature. She’s probably known nothing but this farm life and this whole day has been the worst. Now her body hurts in terrible ways, she’s still caged and must fear the worst. We open the carrier into the big cage and leave, as 4 year olds fresh from daycare are really not very well-suited to being around convalescing beings. 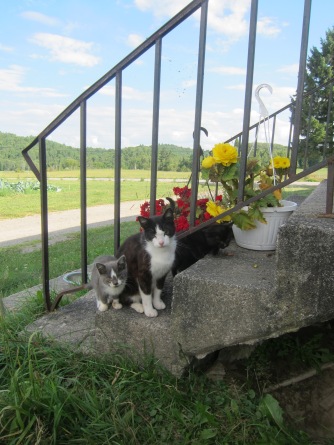 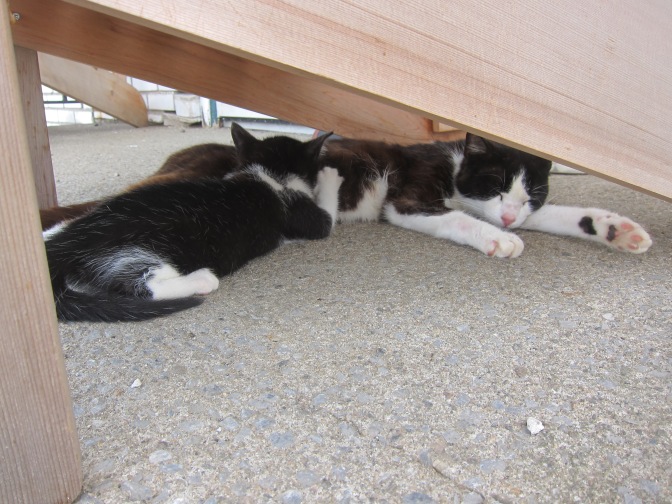 A significant amount of head space has been taken up, since May 2013, trying to figure out how to ethically solve this problem. People with more of a rural penchant advocate that they be shot. Others are more stumped. The SPCA has been talking to me about a special pilot project since summer 2014 (emphasis on talking). They can maybe help, but only if we feed the cats. The municipality does not have a program to help with cat colonies, but they strongly advocate that we not feed them.

I have been exasperated to tears by these cats. Some are in okay shape and some just look terrible. There is no catching them, no going near them. Going to the barn to feed them and our old hens has been pretty sad. Seeing the skittish new arrivals, the unwellness of the older gang. Doing nothing seems terribly unethical, and this farm becomes breeding ground for cat misery. Doing something is wrought. Solving this problem the more rural and farm way seems unethical, but the more urban, ‘pet’ way was proving to be quite a challenge and super costly.

As I fed the hens before supper, I just kept thinking, but how will I ever get that cone off of the poor thing. And how cruel to leave her here, but she’ll be even more disoriented in the house (and frankly, these feral cats terrify me, especially when they’re trapped).

After supper, I went to give her her ration of water. Lo and behold, she had escaped from the cage, leaving behind the carrier and the collar and the cone.

Part of me fears terribly for her stitches, her body fresh from surgery. And part of me is awed by her resolve and resilience.

I really hope she makes it.

We’ve returned from our city holiday. As soon as I took in the feeling of relief at being home, the weight of the work that needs doing here set it. Paired with the heat and the exhaustion , my stomach is in knots.

The hens don’t have proper nesting boxes or perches. The incubator website needs work, as does the project’s dissemination efforts. The baby’s bedroom needs blackout curtains and baseboards. The work of transitioning to the new daycare has begun. The work of selling eggs and business book keeping need to be chipped away at. The second house needs tenants or something. And the list goes on. And on.

In these moments, I wonder what our lives would look like if we were living in an urban centre. If I was the primary breadwinner. If the kids were in daycare full-time as of 12 months. If the only animal in our care was a dog or a hamster. These aren’t helpful thoughts.

The babe is sleeping. The day is overcast and more (much needed) rain may yet come.

Let’s do what we can.

With our daycare provider on summer break, we’ve been going on various mini-breaks, the last of which (thankfully) is drawing near–some last minute cattle trailer and chicken coop work permitting.

The big news is that 50 laying hens arrived today. I was expecting them to be ready in October, so it’s been a bit of a scramble.  Last time hens arrived here, a few weeks after our move, P. got to work on the day of to get a small A frame chicken tractor (moveable coop) built, this time we’re not affording ourselves very much more time.  Part of me is super grateful to have such a patenteux co-pilot, and part of me wishes I was forced to build things on the fly myself. Mostly, I long for days where I don’t feel we’re flying by the seat of our pants quite so much.

The plan was for this to be a makeshift moveable coop built rapido and for us to build a more permanent coop in the open space of the barn together, but we may just end up parking this build in that open barn space.

I hope these fifty hens enjoy being here, despite this late coming coop. They’re following the pigs in the pasture rotation, so they’re bound to find all the dust baths and insects they’re craving.

The garden is growing and (after many foiled attempts) this is the year of the brassica. We already have a blanched meal-sized portion of broccoli for every week of the year that we don’t eat out of the garden, and the cabbage situation is pretty promising. 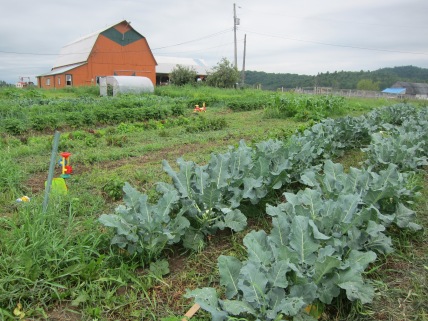 The farm yard seems to have come to terms with the fact that we don’t plant flowers or tend flower beds and lovely daisies are sprouting of their own volition.

A literal truckload of firewood is ready for the stacking. Some thirty bales of hay were wrapped today. Summer as preparation for winter. 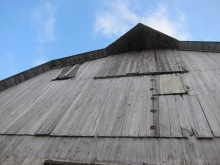 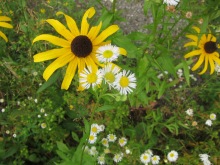 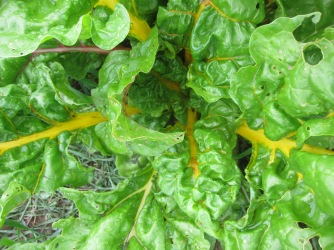 Olga lost a kitten today. He was sleeping under a vehicle and didn’t get out when the truck pulled away. In moments like those, I hate this place. I know that kittens die in cities too, that I’m even trying to curb the cat population here, but death is so ‘in your face’ on the farm. And we were scrambling to get a fence up so that hens could be freed and fed — the ethical dilemmas in the showing of care and honouring these beings just always pulls at me. It confuses and exhausts. And there’s just no time to take it in.He was buried, le petit.

In lighter news, F. and I have named the bull with the sore leg, that we’re keeping close to the barn, Dimitri Doux-doux. He wears the name well. Also, all of the wagons have become squash mobiles.

We have just acquired this new-to-us food dehydrator. I probably won’t go full bore with Godiva pumpkin seeds again (failed attempt two years back. The seeds tasted like silage and are thus still in our freezers), but am looking forward to experimenting with fruit, chips and crackers.

Mothering two little kids on a farm in the summertime — I am exhausted and can’t believe it’s August. 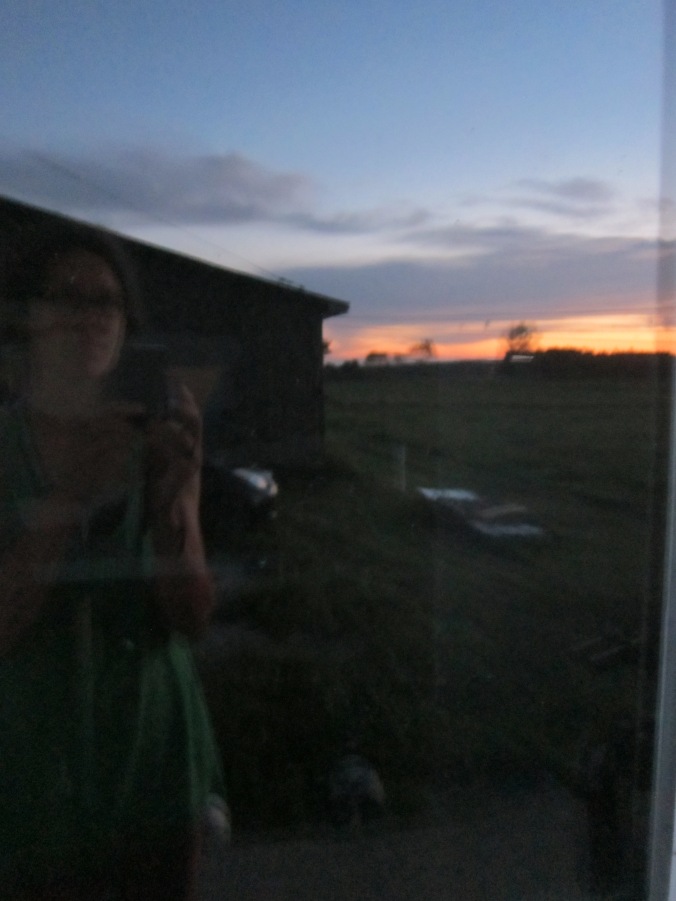