one should make hay when the sun shines, so in a fencing lull, with our eye on the weekly forecast, we went about making plans to cut, ted, rake, and bale a few pastures. we need around eight hundred bales to feed the cow-calf pairs through the winter and i think both p. and i were getting pretty anxious seeing the neighbours hauling cart after cart of luscious golden hay, so the time was ripe.

we were hoping to harvest at least a hundred bales and we figured we’d need at least four consecutive  days of sun and warmth to get the job done. the thermostat was to be in the 30s for a solid mid-week and the sun was set to shine. we embarked. hay making means something like sixteen hour days, endless hours bumping along in a tractor, and being super OCD about listening to weather reports.

when p. started talking about us « entering hay season », we were all pretty stoked to partake in this true farm experience.  turns out it’s a lot of taking over someone else’s house chores (cooking, milking, etc.) and not that much excitement. regardless, all of those who wanted tractor shifts got a kick at the can. i’ll admit it was my first time driving the thing. and as a standard vehicle, let me tell you, it’s easier to drive than our focus. 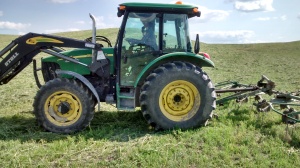 here’s the hay tedder. the teeth spin to aerate and spread the grasses out, or to « wuffle » the hay, to expose more of the cut to sunlight, air and wind and thus speed up the hay-making process.

and here’s the awesome warning sticker on the tedder. the words, if there were any, have rubbed off, but that twirly body says it all. 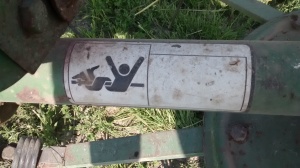 despite five solid days of heat and sun, the humidity and stillness of the air did us in. on the sixth day it poured. it rained like it hadn’t in months. p. managed to bale 30 solid bales of dry stuff, 50 of moist, and the rest is still (rotting) in the fields a week later. so effin deflating. in cities, you just don’t have that sort of experience. my closest is probably when a day or two of freezing rain in february ruins the ice on the rideau canal and the city closes the skateway for the season despite an upcoming cold snap. it’s never been about livelihood for me. and these failed bales totally are. there’s also a significant strain from having a partner away for a child’s entire waking hours, from rejigging house chores, and from not really sharing daily experiences enough for true empathy. mais c’est la vie, these days.

here’s p. rolling in with the dry bales in the pouring rain.

we’re going to be giving it another go in september. and undoubtedly buying a bunch of hay for our first winter.